The attractive interactive travelling exhibition devoted to the coastal lagoon Atanasovsko Lake was created and implemented by the project team in March 2015. The exhibition is based on the gathered information and the results of Actions C, D1 and D2. It contains interactive educational modules for the lagoon and information about the lake and its inhabitants and was named "symBiotic". It focuses on seemingly invisible connections and relationships between the environment and occupants in the lake and the role of humans in these processes.

During the collection of information, a series of meetings with experts working for years on the lagoon were organised, and a big volume of scientific literature on the wetland was collected. For the overall implementation of the project, we wanted to work entirely with local people and to integrate them into the cause of promoting Atanasovsko Lake - suppliers, craftsmen and contractors, distributors of materials, local packaging companies, advertising agencies and others. Searching for the right people for the implementation of the exhibition a number of meetings with various Burgas authors were also organised. Finally, we chose the architect Mariana Sarbova from Hamalogika NGO, designer Nedko Nikolov and architect Galina Milkova from Think Forward to work jointly with project interpretation officer Diana Pavlova on the realizing created by her a conceptual design of an interactive travelling exhibition for the coastal lagoon Atanasovsko Lake. Diana coordinated the team and the implementation of the project concept. The process of searching for the right shape, style and highlights of the exhibition lasted several months and during that time 13 different options for the vision were created.

"symBiotic" is a modern, innovative and artistic installation through which the audience meets, detect, and investigate the secrets of Atanasovsko lake. The selected for the exhibition style is called Interactive art. This is an art form that involves the viewer and it "allows" interacting with the work. Visitors have the opportunity to "move" and to "operate" in an environment of hypertext. All educational information is collected and presented in massive prefabricated construction, with three additional modules to it. Installation provokes the audience to go beyond their internal mental action, to be the main character chief inventor and researcher. The information is interpreted in an accessible and understandable manner, but also profound, as the educational focus is not intrusive and instructive, but in contrary, provides imperceptibly involvement. The audience moves independently between different objects and has the freedom to begin the study of the exhibition from where it wants. The personal connection between the audience and the subject of the exhibition Atanasovsko Lake arises through the use of various illustrative media: black and white photos under Plexiglas; real objects from the lake - salt crystal; Multimedia - audio and pictures from the lake; animation; funny drawings; puzzles; mock-game part of the lake with an educational nature; doors for Explorers that a visitor opens or pulls to reach the data element; and others.

Topics that presents the exhibition are: general information on its lake; history of the lake; protected areas and Natura 2000 area; the European importance of the lake; Birds; fish; plants; Artemia sp.; other residents; species closely related to salinity; adaptation of birds; Via Pontica and migration; harmonious coexistence; artificial islands; Lake and climate change; the colors of the lake; threats; The process of salt production; mud and lye; types of salt; Festival of salt; trivia and more.


During the construction and realization of the exhibition, different people participated voluntarily and they were captivated by the richness of the lake and want to contribute to its promotion in the country. Burgas company Furniture Group paint modules for free, Muse creativity foiling one of the modules, Burgas programmer Yani Tchaushev programmed all equipment installation, translator Alexander Marinov edits all texts of the panels, few volunteers translated the exhibition in Russian and English. 23 photographers donated photos for the exhibition, Aero Cam provided impressive video of the lake from the air for free and the photographer Svetoslav Spasov donated 8 high-quality videos of birds from the lake built for the exhibition binoculars.


The choice of this style and vision of symBiotic replace and enrich the usual audience of such nature exhibitions (nature conservationists), namely already involved and informed to one degree or another nature-lovers and professionals. The vision of the exhibition opened our doors to the popular art galleries, exhibition halls, regional information centres, public and private, which resulted in the new audience - young, highly educated people with different professions and interests - architects, designers, writers, different businesses, etc. New useful contacts with various institutions, municipalities, public and private institutions, individuals and legal entities were established.

The following towns will be visited till the end of the year - Veliko Tarnovo, Vratsa, Bansko, Blagoevgrad. Due to the attractiveness and popularity of the exhibition in the country we’ve received additional requests from Stara Zagora, Shumen and Sozopol, where it is possible to be guests in 2016.

We decided to promote the exhibition with a more attractive advertisement material a package of salt from Atanasovsko lake with name a tale for lake, salt, birds and people (90000 packages with salt was produced – this was the minimum circulation of the printing house) and stickers (2000 copies) instead publishing of a flyer for it (10 000 copies). Salt packages were very well accepted by the public and reached thousands of people who become familiar with the idea of the exhibition and Atanasovsko Lake, with website and logos of all partners and LIFE and Natura 2000 logos. Even the director of the packaging company was so involved and attracted by the exhibition that he travelled from Sofia to Burgas for the official opening.

The road of the exhibition 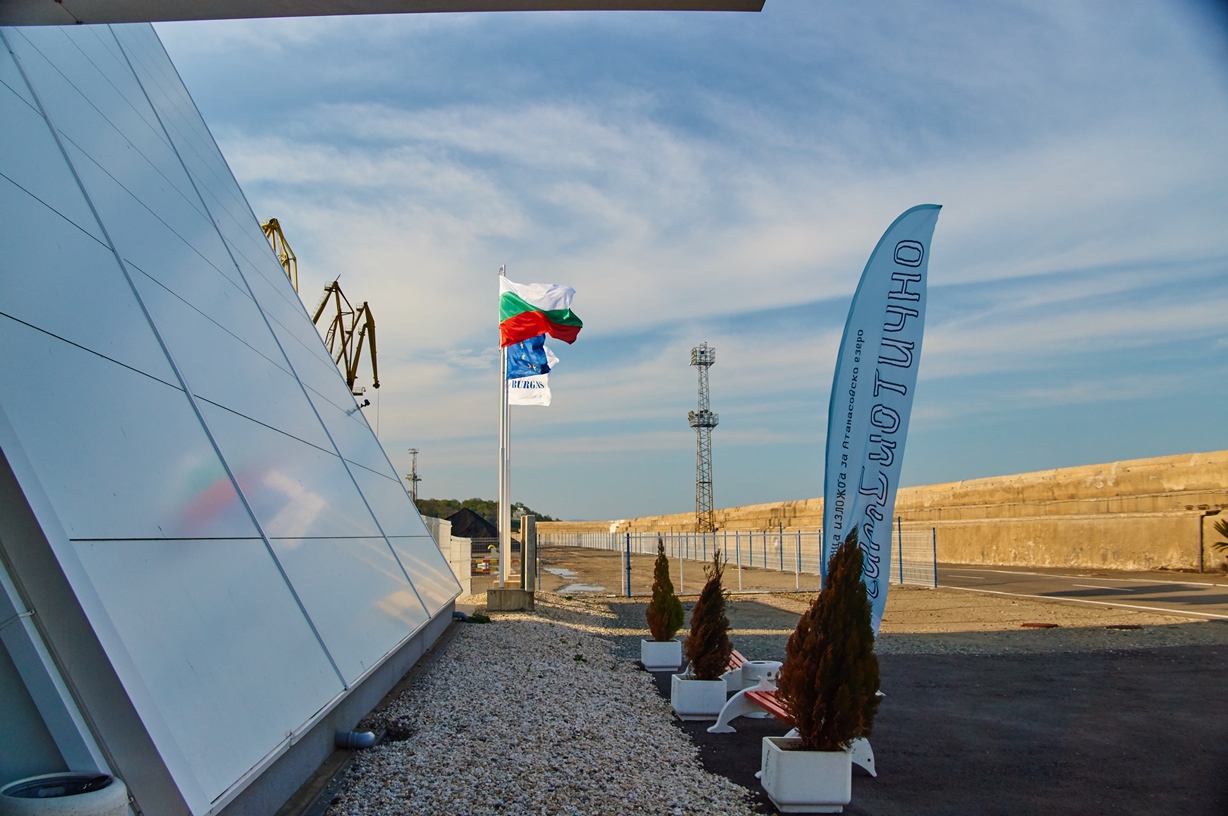 The exhibition was presented in a special place - Port of Port of Bourgas, which was first open for free access by citizens and visitors.
You can be reached along Old frigate in the port of Burgas to the lighthouse. 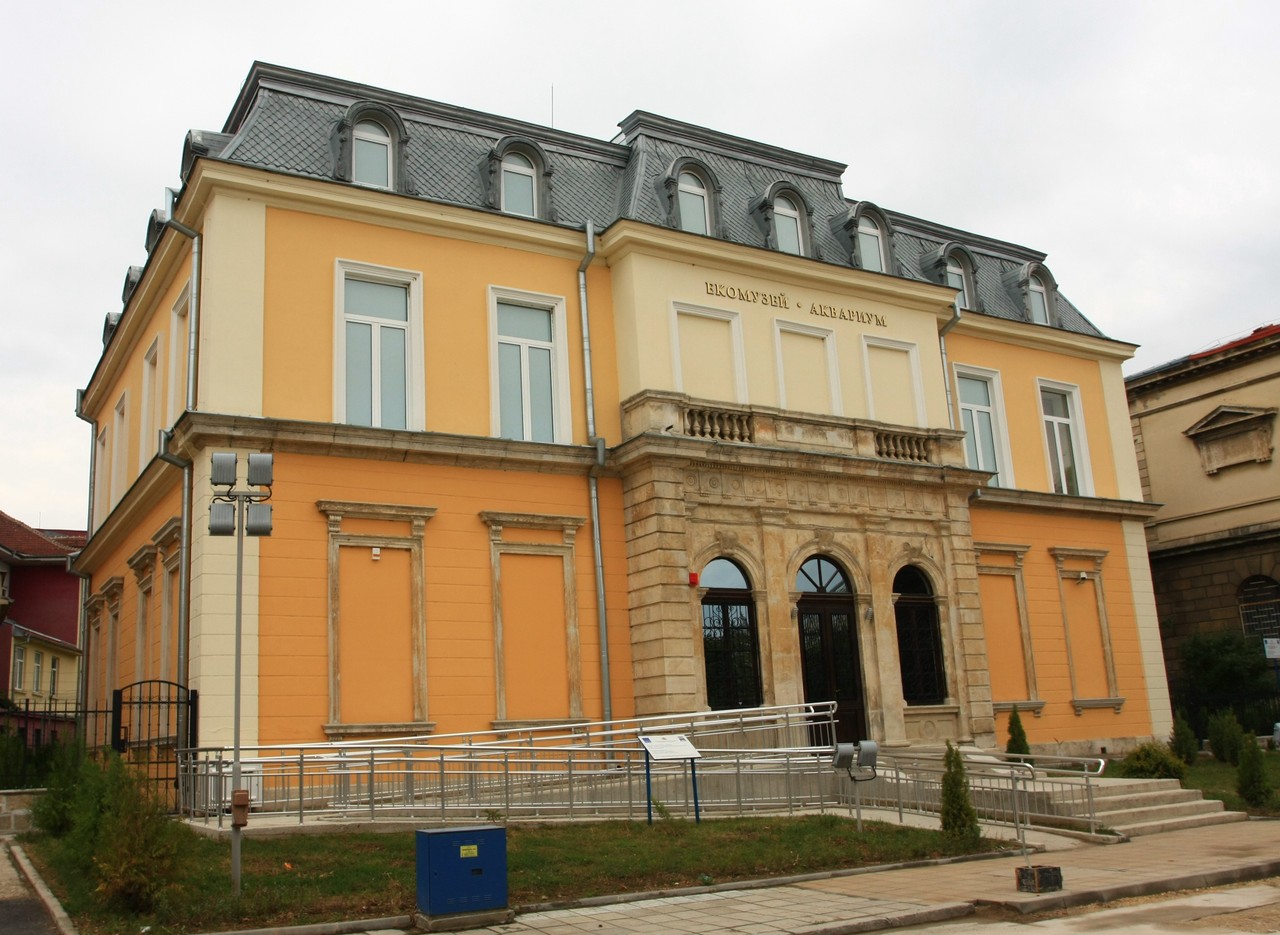 Bulgarian Biodiversity Foundation accepted the invitation of an eco-museum exhibition to visit its halls and coincidentally chose Ruse, because of active citizenship and local citizens for their special relationship with nature.
From 22 May to 14 June 2015 every day from 10:00 to 18:00
Eco-museum with Aquarium - Ruse
Opening May 22, 2015, 18.00 - International Biodiversity Day 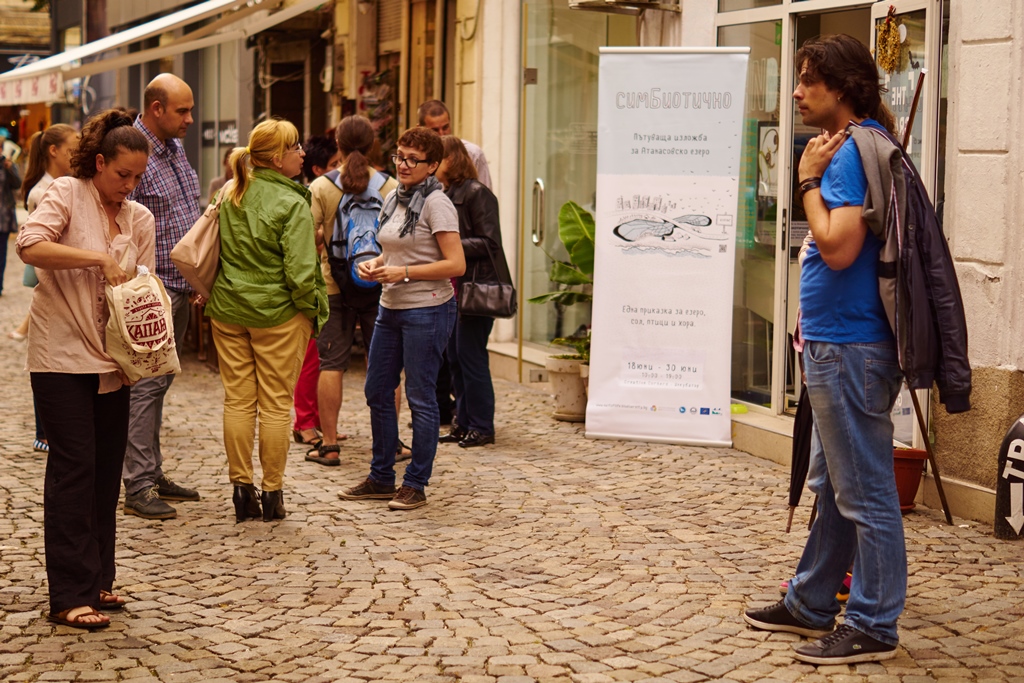 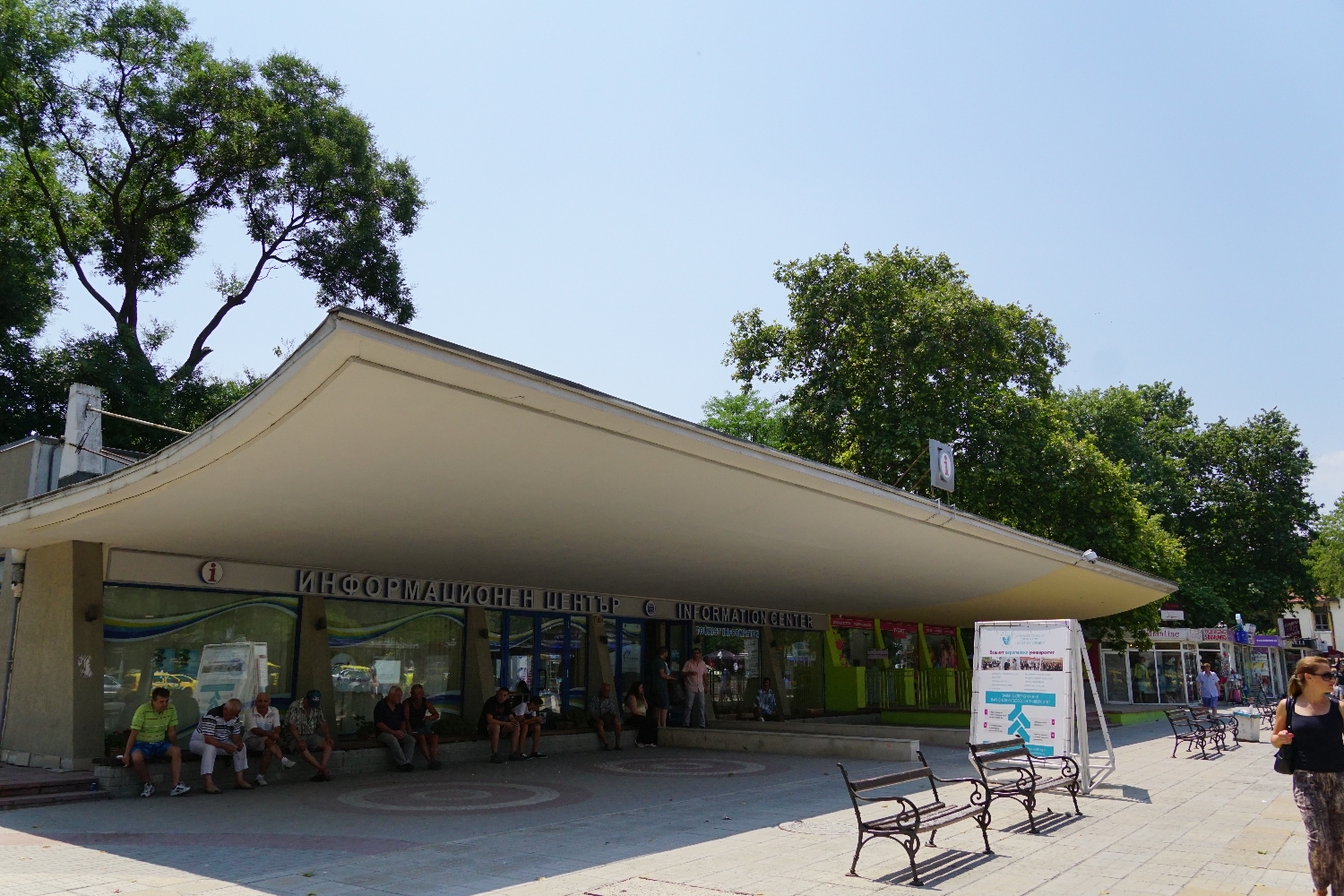 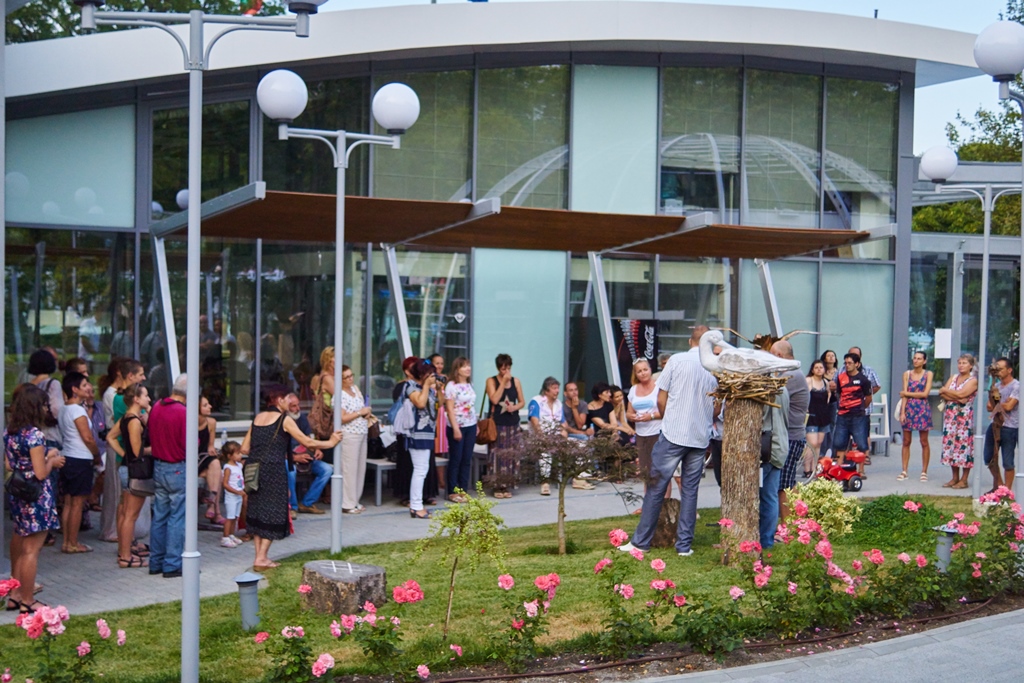 From 5 to August 22, 2015, the exhibition was again in Burgas, but this time in Seaside Park - in the exhibition centre "Flora" - Burgas. We found it on August 5 at 19.00, with the exhibition of birds of Artists Dobrin Vutev, Ognyan Stoyanov and Atanas Petkov and in the presence of Deputy Mayor of Ecology of the Municipality, the head of the Society of Artists and VID Executive Director of BBF. 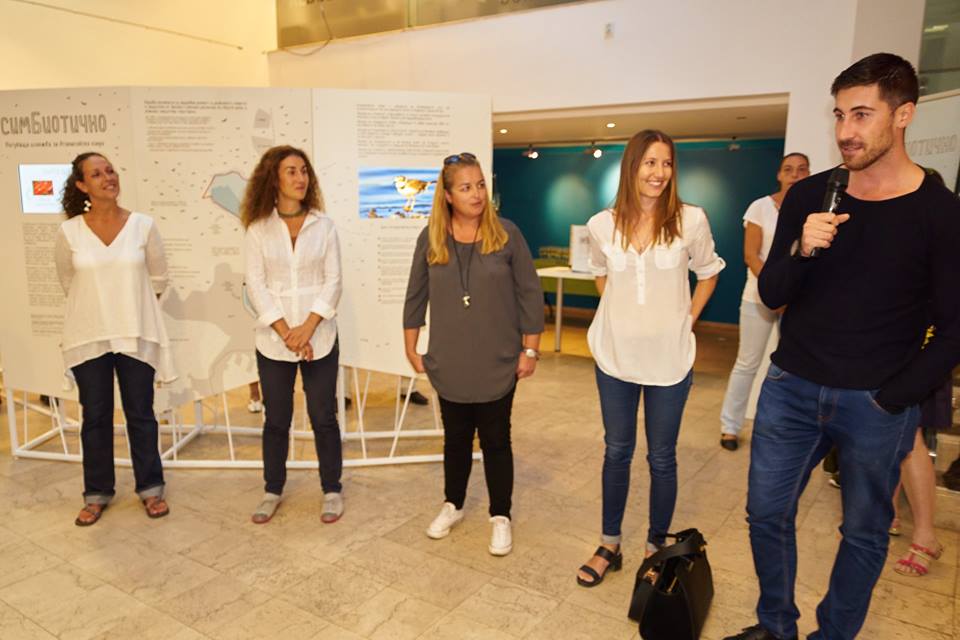 From 8th to September 28th, 2015 in the gallery Credo Bonum has presented our sympathetic exhibition. The opening was on September 8 at 18.30 and it was attended by over 130 people - foremen, colleagues, friends of the lake, scientists, researchers and many children who long enjoyed the constructor and copy the birds. Attended by all the authors of the exhibition. 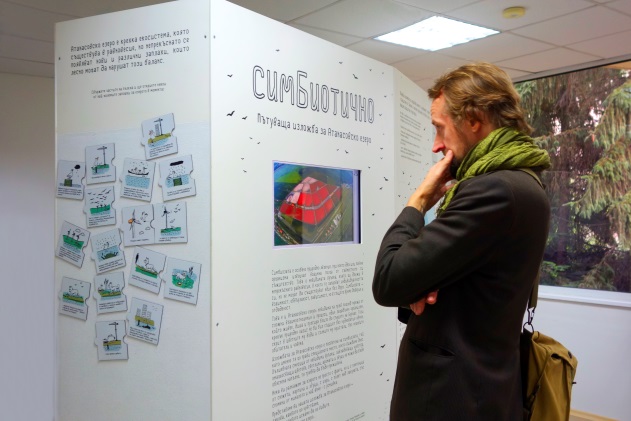 One of the places where we present the exhibition and especially we are excited by the reaction and the interest of the audience is the old capital. The opening of October 13 at the Regional Information Center Hall does not disappoint us, as more than 50 people came to visit the Atanasovsko Lake. The exhibition will be there until October 26, 2015. 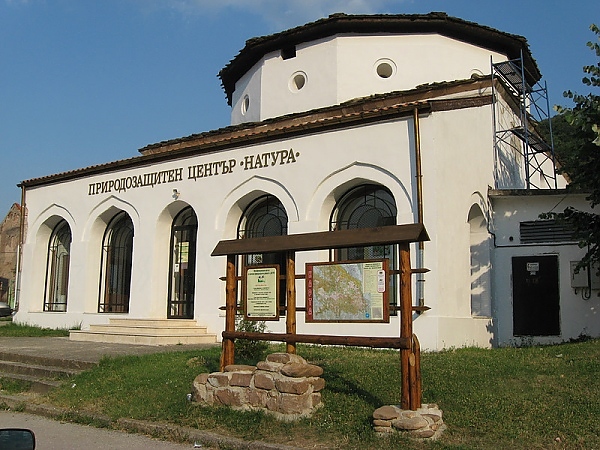 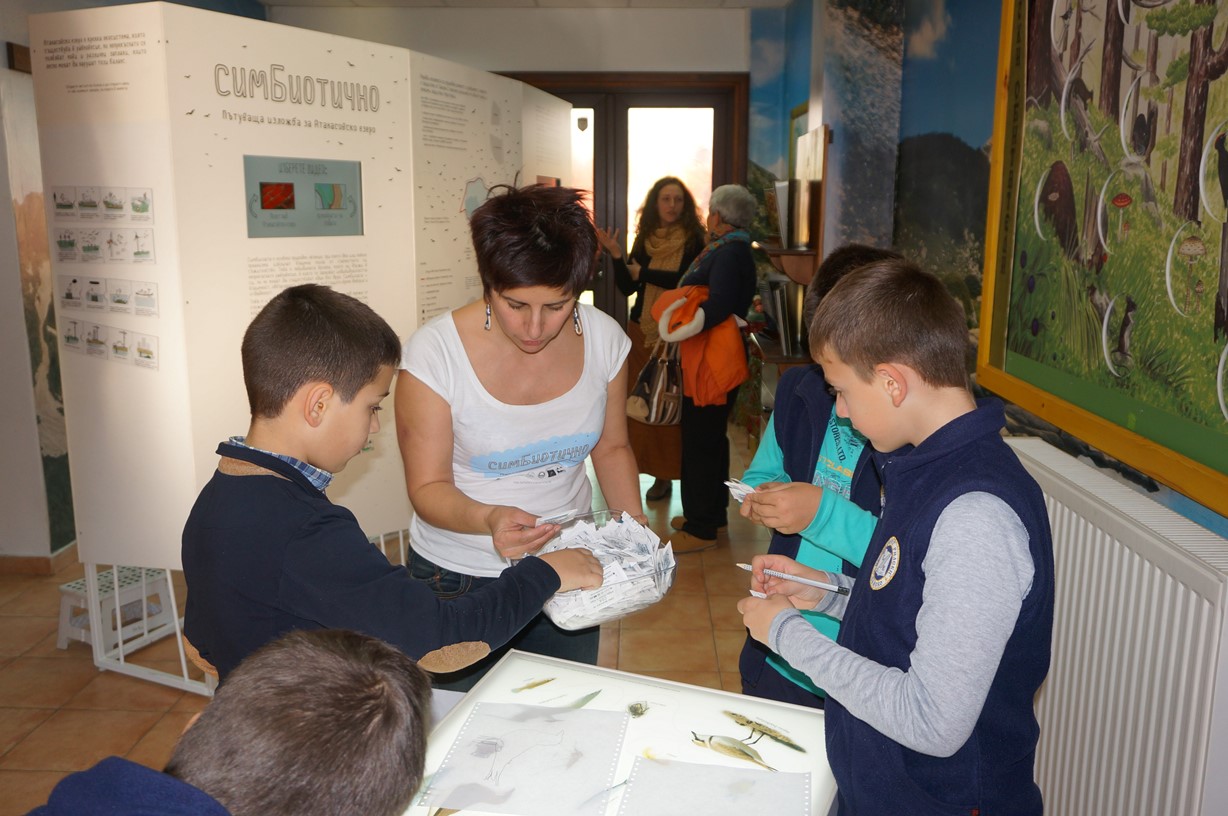 Bansko
We opened on December 4, 2015, at the Visitor and Educational Center of Pirin National Park and will be staying until February 4, 2016, so if you have a road or rest in Bansko and the region - do not miss to see our exhibition!
In February 2016, the exhibition at the new Visitor Center of the Park, which is located at the foot of the mountain (at the very end of the town of Bansko up to the lift) 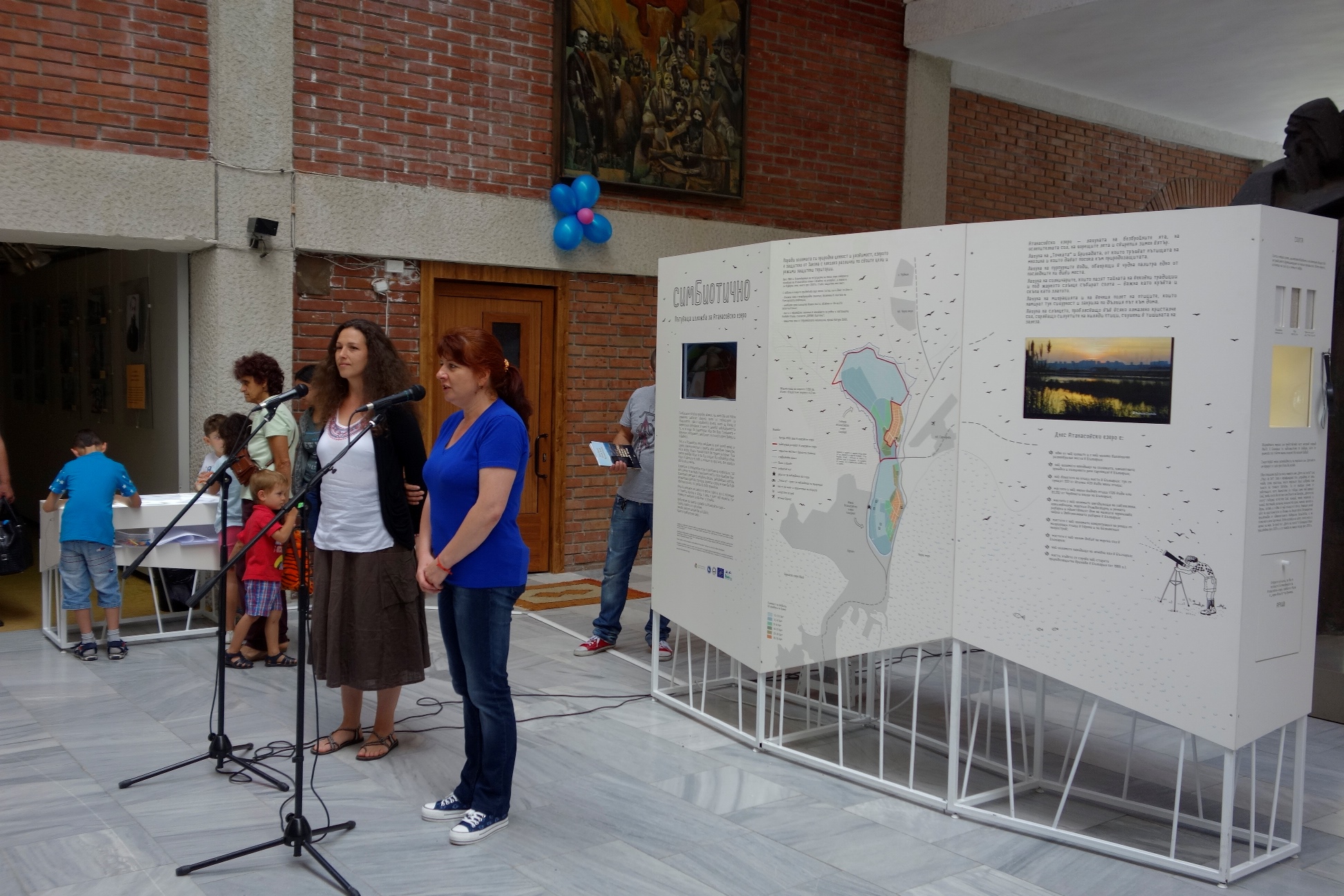 Blagoevgrad
The official opening of the exhibition is on 9 June 2016 (Thursday) at 11.00 am at the Regional History Museum in Blagoevgrad, Varosha, Rila 1, and then can be viewed every day from 9.00 am to 6.00 pm, until July 13th. 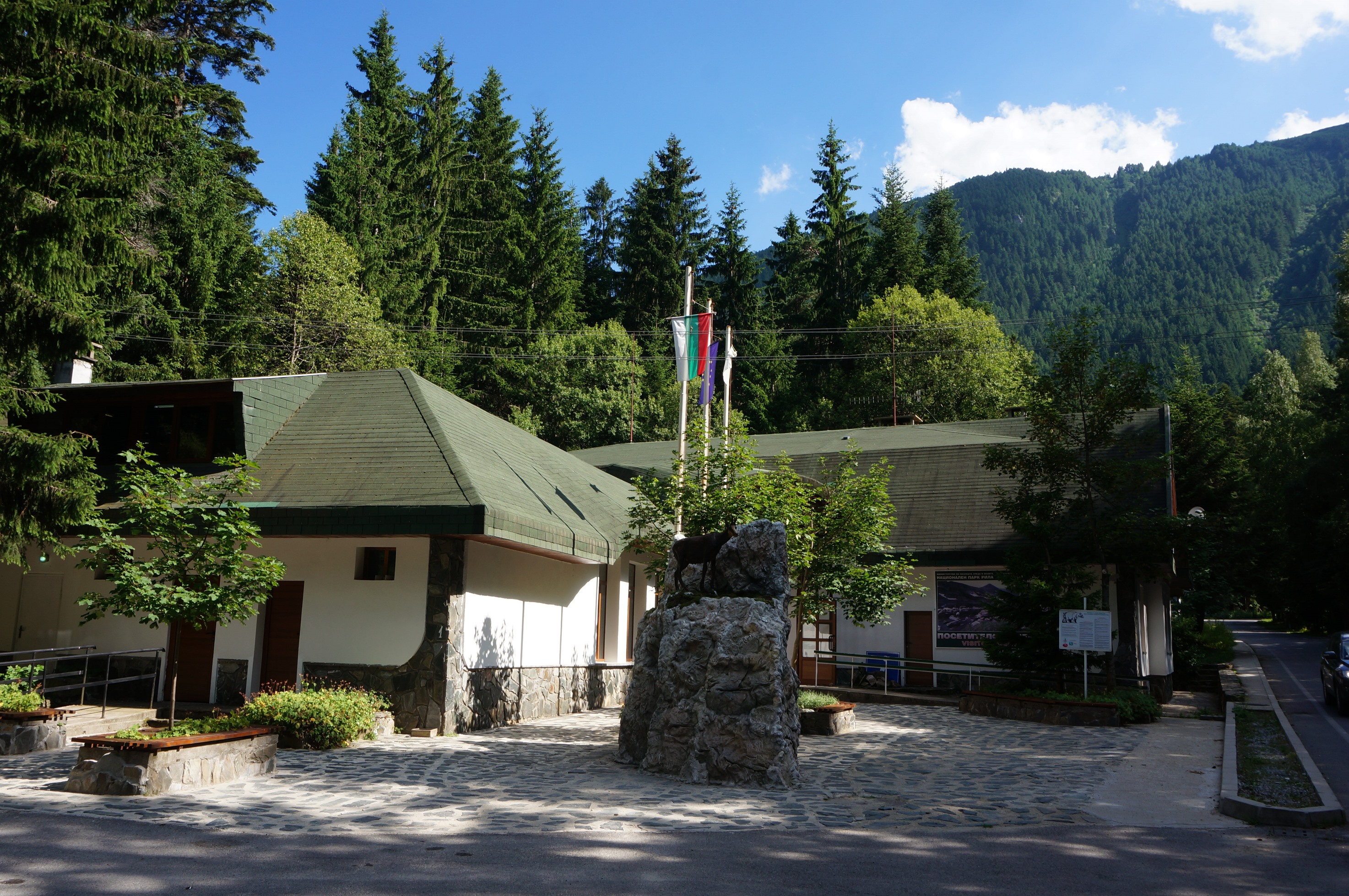 Panichishte
From 11 July to 30 October 2016, the exhibition was visited by the Directorate of Rila National Park and was presented at their information and visitor center in the Panichishte area at the foot of the mountain. Thousands of tourists who visit the park and especially the Seven Rila Lakes managed to get acquainted with a different and salty lake that fascinates them. 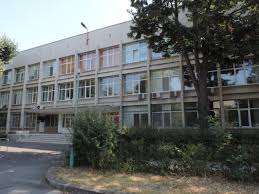 University "Prof. Asen Zlatarov"
From November 1, 2016 to March 31, 2017, the symbiotic exhibition will be attended by Prof. Dr Assen Zlatarov University in Burgas at the invitation of the Department of Ecology and Environmental Protection. The exhibition is located in the foyer of the Inorganic Corps - on the first floor and can be viewed every working day.from October 31 to November 15, 2015, in Nature Conservation Center